Epistle to Robert, Earl of Oxford

'And sure, if aught below the seats divine
Can touch immortals, 'tis a soul like thine:
A soul supreme, in each hard instance tried,
Above all pain, all passion, and all pride,
The rage of power, the blast of public breath,
The lust of lucre, and the dread of death.'

Epistle to Robert, Earl of Oxford, and Earl Mortimer 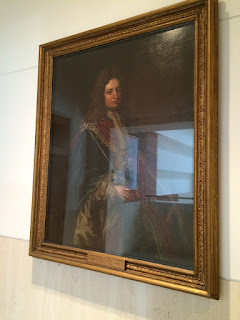 Writing poetry that was dedicated to, and about, an individual was enormously popular in the eighteenth century.  Indeed, composing dedicatory verses was in widespread use as a way of gaining (financial) patronage from a wealthy noble.  This poem, however, is a rather more genuine expression of respect and esteem.  The poem’s author, Alexander Pope, and its subject, Robert Harley, the Earl of Oxford were good friends, and both were part of the influential group of writers known as the Scriblerus Club (and which also included Jonathan Swift, Thomas Parnell, John Gay, and Dr. John Arbuthnot).  Unlike the other members of the group, Harley’s literary output was not in any way great, but he did leave a lasting legacy to British literature by gathering much of the collection of books, manuscripts, and pamphlets which his son would later donate to the nation to form the foundation of the British Library (the photo depicts Harley's portrait outside the Maps and Manuscripts reading room in the British Library).


Today’s poem owes much to the friendship that existed between the Scriblerians (as they are now referred to).  After Parnell’s death in 1718, Alexander Pope prepared an anthology of the late writer’s poems, composing this dedicatory verse to preface the collection and delivering a draft copy of the poem to its subject Harley on 21 October 1721.  Although this might be seen as somewhat self-advertising, an exchange of poetry had been an important part of the relationship between the friends during the heyday of their Scriblerus Club meetings in 1714.  Indeed, it is to these meetings that today’s poem seems to refer when it states how Harley was:
‘Fond to forget the statesman in the friend;
For Swift and him, despised the farce of state,
The sober follies of the wise and great;
Dexterous, the craving, fawning crowd to quit,
And pleased to ‘scape from Flattery to Wit’
(lines 7-12)


The sense here is of the group as aloof from a world of petty political wrangling, free from the party politics that divided the government and thus able to find satirical humour in all the intrigue and political posturing.  Yet the poem is also very much about Harley’s own place in the political arena.  Having served as Lord Treasurer from 23 May 1711 to 27 July 1714 (effectively equivalent to the modern day role of Prime Minister), Harley had been at the very centre of the British government through what was perhaps the country’s most important political crisis in the early eighteenth century: the problem of who should inherit the crown when Queen Anne died.  The choice was between the Catholic heir of the deposed James II (Anne’s father, thrust from power in the ‘Glorious Revolution’ of 1688 by Anne’s sister Mary and her husband William III of Orange), or the royal family’s nearest Protestant relations in the German House of Hanover (the family which would indeed succeed to the throne upon Anne’s death in 1714).  As Lord Treasurer, Harley managed the opposing factions so well that, to this day, the question of which side he actually supported is still very much up for debate.  Whichever way his views truly tended, however, when Hanoverian George I succeeded Queen Anne in 1714, Harley’s rivals in government managed to implicate Harley as an opponent of the new regime, to the extent that from 1715 to 1717 he was held in the Tower of London, accused of treason.  Despite his ultimate release, his political career was now well and truly over, and it is to this that Pope alludes when he states that ‘In vain to deserts thy retreat is made’ (much like the political wildernesses often referred to today when politicians fall from power).


A true friend, Pope emphasises how Harley has retreated to this desert ‘In vain’, for ‘The Muse’ (presumably an allusion to Pope’s own poetic endeavour) has not deserted Harley but intends to ‘dignify disgrace’ of political exile through the honest admiration of the poem.  For as Pope is quick to emphasise, these dedicatory verses lack the more traditional financial motive; he describes the poem’s artistic ‘Muse’ (personified in classical style as ‘she’) as ‘No hireling she, no prostitute to praise’.  The flattery of this poem is not offered in exchange for money, but as a sincere and grateful return for friendship.

You can find this poem:

Alexander Pope was one of the most important poets of the eighteenth century, and one of the best loved and most studied by eighteenth-centuryists today.  Suffering throughout his life from a curvature of the spine, Pope was further disadvantaged by the oppressive anti-Catholic laws of the time, and which forbid any Catholic from living in London or holding public office.  There is no repressing so great a poetic talent, however, and his place in the canon of eighteenth-century poetry is amply deserved.  His major works include comic poetry such as The Dunciad (1728) and The Rape of the Lock (1712-14) (yes, I know, the title does not tend to suggest humour, but the poem is actually about the theft of a lock of hair).  During his life he was most prominently known for his English translations of the Greek poet Homer’s Iliad (pub. 1720) and Odyssey (pub. 1725-6), the first major English versions of these texts to be published.

You can find out more about Pope:

http://www.britannica.com/biography/Alexander-Pope-English-author
(Encyclopædia Britannica: so much glorious information here, so beautifully and approachably presented! And freely available…)


http://res.oxfordjournals.org/content/66/273/106.full.pdf+html
(An absorbing example of current academic scholarship on Pope, this article is a really interesting look at Pope and his political poetry, together with the broader context in which he was working.  Like most academic writing, it does assume a certain knowledge of eighteenth-century literature, but nothing that can’t be gained with aid of an internet search engine! The author is on twitter @josephhone1 and well worth following!)


http://www.twickenham-museum.org.uk/detail.asp?ContentID=19
(A museum about the Twickenham area, where Pope lived; this site has some interesting biographical info)

The facts and figures for this blogpost was obtained from the following sources:

Fierengraw
I am an enthusiast of all things 18th Century, and recently finished an MSt in English Literature at the University of Oxford. I am now studying for a PhD at the University of Liverpool, and my thesis examines pre-chapter quotation in 18th & 19th century novels. Feel free to leave 18th-century related questions in comments! Twitter: @fierengraw